I arrived in Nebraska in the month of June, accustomed to the Mediterranean heat of California, in the valleys of the coast range – so all that summer, I was wonderstruck by the furious, pounding summer storms, the thunder and lightning; torrents of rain; and the humidity that followed. It was all so novel. I did not live in a place with air conditioning, but it was part of the adventure of learning a new world. As the summer ended, I knew enough to expect a harsh winter. But before all that, there was fall, and it was one huge flame of color 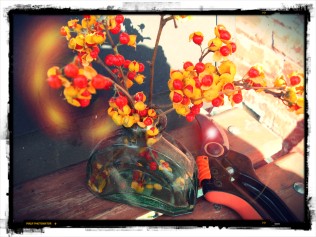 And bittersweet was one of the first hundred uniquenesses of the midwest. It was on a hike that fall that a friend pointed out the clusters of red and gold berries, high up in a bare tree. Bittersweet is a woody vine of the genus Celastruc scandens, native to north American central and eastern woodlands. It can meander on its own, but it likes to climb trees, and after the wind has stripped the last leaves away, the berries become visible. My hiking companion told me it’s considered a pest by some; vigorous enough to engulf and choke its host tree. A few weeks later, at a farmers market, I found wreaths and sprigs of bittersweet amongst the apples, honey, pumpkins and squash of the season. I’d learned that it was illegal to harvest it in the wild, and someone was making a lot of money selling these little twigs for eight dollars a bunch. So if I was to have my own, I’d need to have a house and a garden, and I began right then to pine for one – but the whole idea had to hibernate for a few more winters.

I planted it along the fence – it would cover the plain chain link, and the fence would be its trellis. I waited patiently for two or three seasons – but no berries in the fall. So the next thing I learned about bittersweet is that you need to have both a male and female plant; one to pollinate the other. I had no idea where to look or how to know that you had both varieties – but I lucked out on the second one I bought; it cohabited successfully with its neighbor, and in the next season, there was fruit. It likes the sunny slope on the south side. It has spread out over twenty feet along the fence. Over the years, the vines have curled out, looking for structures to grown in and around. They knitted themselves into the links of the fence; so densely that when it was time to replace the fence this year, it could not be extricated from the plant, so we trimmed as best we could around it, and left some of the fabric a permanent part of the plant. I’ve had the vines get entangled in my hair as I work around them, and if I were slower moving, I might be like the fence – made part of this growing thing, not to be separated.
I don’t know why it has the name bittersweet, never even looked until today. The berries are not edible, and might be poisonous. There’s an oriental variety that is more dastardly – the one that chokes trees and poisons children. But it leaves me reluctant to actually taste a berry to see how the name is earned. I am fine with the poetic implications.

The green berries come on at the height of summer, turning yellow with the cool weather of fall. But it takes a taste of three seasons to fully reveal the beauty: With the first freeze, the yellow hulls pop, almost inside out, revealing the red berry within it. I bring them inside in small bouquets, in wreaths for the door and table; give them away; small blazes of fall color that remain when the last leaves are raked or blown away. Most of the berries stay out there for the birds. I can see dozens of them dining on what I leave, still bright against snow in early winter. A bit of one season that carries over into the next.