When we visited New York City this spring, I wanted to see the World Trade Center site. Six years later it is a still a vast crater — a scar that must surely be visible from the moon — with few signs of reconstruction, and no memorial beyond the displays and tributes, formal and home made, on the construction fence around it. It is a silent place. There is nothing to say. Walk away sad.

I was drawn across the street toward the graveyard of St. Paul’s Chapel, looking as it has for more than two hundred years and as it did on that awful day six years ago. Only a hundred or so feet away, it was virtually untouched by the collapse of the towers. 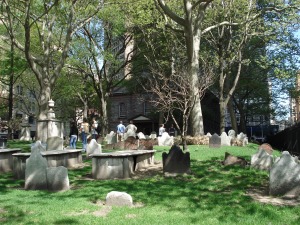 I thought I’d remembered hearing that people took shelter here so I searched out the story. I learned that a huge old tree on the grounds came down, protecting the chapel from debris. In the immediate aftermath, and for months thereafter, the chapel sheltered rescue workers who slept in rows of cots during brief respites from the grueling work. Volunteers made up the cots with clean sheets and stuffed animals in between shifts, and someone hung a dreamcatcher in the window, wishing them protection from being tormented by what they had done and seen.

St. Paul’s Chapel, built in 1766, is the oldest public building in continuous use in Manhattan. When the new nation’s capital was briefly in New York City. George Washington was known to have attended services here. Many others of the first European families to settle the island are buried in the churchyard. Here it has stood through the centuries, far outlasting the towers with their lifespan of forty years and three thousand lives. Likely it will also endure through the waves of violence, the hundreds dead, the blind rage of retaliation unleashed by this nation.

I’m not crazy about churches at all; preferring the trees and air around them. More healing and less corruption. But I get the idea of sacred places. And an ancient church with a motley collection of cots and blankets, where exhausted workers could rest free of bad dreams, strikes me as sacred. It worked for me on this clear sunny day six years later.
Written in the spring of 2007

This entry was posted on Wednesday, May 26th, 2010 at 2:39 am and tagged with St. Paul's Chapel, World Trade Center and posted in Uncategorized. You can follow any responses to this entry through the RSS 2.0 feed.
« “Gasp!
It’s All Memory »