In May 2013, I accompanied my daughter Allison on a transatlantic cruise. She was working on behalf of the Smithsonian National Portrait Gallery, presenting programs on the thirteen long days at sea, and I was her lucky sidekick. It was a marvelous experience, starting in Fort Lauderdale – with a stop in the Azores Islands after ten days at sea. The next ports were at Cherbourg, Bruges, and finally England, from where we flew home. Here is a recollection after a few days back on solid ground — and ancient ocean floor — in Nebraska.

Orient: From Middle English orient, from Old French orient, from Latin oriens (“rising; as a noun, the quarter where the sun rises, the east, day”), present participle of oriri (“to rise”).

A few days after arriving home from our two week voyage, and at the end of a long day back at work, what was intended as a short nap turned into a sweet, deep sleep. When I awoke, just at sunset, I remember the physical sensation of surfacing toward consciousness, as if from deep underwater, and thinking “I wonder what country I am in.” Through those last few layers of dream, the mind did its checks to answer that question: date and time, latitude and longitude, time zone, city, state and country, home. I remembered that our bedroom window is oriented west, thus the sunset through a filigree of leaves on the maple tree. I put down roots of consciousness 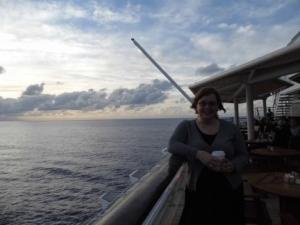 Within the first day or two of the cruise, I became aware of feeling the movement of the sea as it radiated through at least ten layers of the ship. Decks is the seaworthy term I think. During the day, and in open spaces where the horizon was visible, it was less obvious. My legs made a constant series of fine adjustments to keep me balanced. I walked laps around the deck one day, one of the days of rougher seas, and my step counter not only registered the mile I walked, but calculated the equivalent of climbing 20 flights of stairs, as the deck fell away and arose again In front of me. But in closed internal spaces, without the fix of the eyes for balance, it produced a vague dis-ease.

On the second night, we went out onto one of the open decks after dinner. I wanted to see what the stars were like. It was a little cloudy, and few stars were visible. I have never seen such absolute darkness. Yellow lights on the deck, and running lights along the sides, threw a few feet of illumination into the sea, and the wake alongside us lit up, then disappeared. In the main reception area of the ship there was a video screen that showed a little “x” for where in the huge ocean this

tiny ship was at the moment — so theoretically, I knew we were “somewhere”. But at night, there was no visual indicator that this is true. Yes, I was sure that someone on this huge beast knew where we were going. They even had a program about it, bringing up an awkward engineer from below decks to explain torque and thrust. For a few moments I empathized with the first sailors who made these crossings, and I completely understood how a moment like this could give rise to primitive fears about sea monsters. Most nights, the sensation of rocking that one feels lying down had a satisfying and maternal rhythm. But on this night I was far more concerned, imagining the great dark space we were in.

So I checked that little red “x” every day, and for ten days we sailed toward the Azores Islands, a chain of volcanic islands about 900 miles off the coast of Portugal. With these long leisure days we had nothing to do but spread rumors, so I can’t even remember exactly when or how it began to circulate that we might actually be heading for the lost continent of Atlantis. Are we somewhere or nowhere? The maps I studied in anticipation of traveling showed beginning and end points, and detailed the lands, the continents, the ports, the cities. I realize how accustomed I am to thinking of lands as the positive and seas as “the negative” – the invisible spaces between, the emptiness to cross over. In the ship’s library I found an atlas that revealed the geography of the ocean below us. For a change, it was the land masses that were blacked out as if they were irrelevant. I learned that we had been following a formation called the North Atlantic Ridge, and the volcanic peaks of the Azores rise along it. Measured from their base on the ocean floor, the Azores would be the highest mountain formations on the earth.

Familiar and unfamiliar, oriented and disoriented by turns.

Such a contrast to the slow and methodical sea voyage, the flight home from Dublin to Chicago was eight hours of high speed travel. I was well aware of that vast ocean below us, having just come to know it day by day. Now I could watch the little red “x” of the plane on the electronic map on the seat back in front of me. There is a line indicating sunset, and we rode just in front of it all the way, as if the day were being rolled up right behind us. I expected to be tired; I expected jet lag and forgot all the folk wisdom I heard about whether it is worse east to west, or west to east, and what you should do with your sleep patterns to diffuse it. I did not expect to be set down where I left off two weeks ago, with a vaguely pleasant sense of disorientation; what was once familiar seems a little odd now. When I looked up the word, all the associations to “Disorientation” were negative. Alienated, confused, lost. I remember the section of the mental status exam that explores this territory: do you know who you are and where you are in time and place ?

I think I prefer the mild psychosis of travel

This entry was posted on Sunday, May 26th, 2013 at 2:46 am and posted in Uncategorized. You can follow any responses to this entry through the RSS 2.0 feed.
« One of the Seven Simple Machines
Awesomely Untranslatable Words »