Leading up to the Solstice, darkest day of the year, and the first major storm, I am filled with complete and joyful anticipation. It is a rare opportunity to have our two children together and at home, under one roof. This I remember, year to year, preserve and revisit

What takes me by surprise though, after the goodbyes, after the turning away at the airport, is the sad ride home into bleak midwinter, frosty wind made moan. Snow on snow. Snow on ice. Snow on dirty snow. I forget how regrets tend to flood back at this time of year. I awake dreaming of insidious disasters, the roof leaking everywhere and in illogical places; people lost from my past now impatiently honking in the driveway while I search for scattered things.

In my first days back at work, it’s on my calendar to drive to Lincoln and testify at a hearing on children’s mental health Medicaid regulations. This is every bit as dismal as it sounds. But if it must be done, at least a spring day is not wasted on it. Medicaid hearings belong to the bleak midwinter. And there is a different light this time of year, just after the late sunrise, on fields of snow, pink and icy blue. I find a side road where I can stop for a photo. 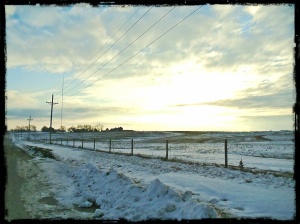 On the road between Omaha and Lincoln

I was once in a study group with a psychoanalytic psychiatrist who, among other interesting theories, believed that every region of the country had its own characteristic and collective mental dis-ease. I can’t remember all of them, but of course it stuck with me that the Midwest is all about depression.

The Nebraska State Office Building (SOB) has always struck me as such a perfect example of collective and institutional depression. The pure hideousness of the architecture never fails to stun me. Or is there any architecture about the place? Who would even claim this as architecture? This on-the-cheap, utilitarian, and graceless structure, shades of grey – and only one or two, not the full fifty — the public spaces devoid of art or anything beautiful ; the absence of natural light. And then there are the policies that emanate from this place. Pinched, stingy, disdainful of the poor : this building is a perfect place for thinking up such misery. The worker drones, heads down in cubicles; shuffling in hallways with lanyards around their necks, coffee cups covered because – I suspect — there is a quality improvement project to prevent spills.

I have been to this hearing room before. It is subterranean and fluorescent lit. full of hard steel stackable chairs. The room is empty and dark. I got here a little early, so I wait behind a coat rack in the hallway on one of those chairs. There’s a fair amount of foot traffic down here. It seems like it is part of a walking track for state employees, a hamster wheel of sorts. They come down for laps around the hallways with athletic shoes taken out of a lunchbag. I am guessing there is a fitness initiative behind this mindless and repetitive looping, which finally ends in state sponsored retirement.

There is a minor functionary from the legal department who presides over the hearing. She flips on the lights at 9:55 am. A dozen, maybe twenty, scatter across the chairs. The room could hold three times as many. But this is to be no stirring debate; it’s strictly routine. They wrote the regulations, and the law requires a hearing. Any and all comments will be recorded. When I did a line by line comparison I found exactly NO changes from the existing regulations. Yet still a hearing must be held. The law doesn’t require them to do anything with the comments but they must be recorded. She turns on her recording device and puts out a sign in sheet. She invites comments. I’ve been to these before. There’s an ominous “After You, Alphonse” vibe. Everyone waits for someone else to start, to reveal the tenor of this event, even though no one thinks it will be explosive in any way. But no one speaks. Finally I break the silence, sign in, read my testimony, and give my thanks. By which I really mean thanks that it is over. “Anyone else?” she asks. Silence. No one? Bueller? Bueller? It turns out there’s a protocol for this. “ We will go off the record for ten minutes”, she says, “in case anyone comes in late or if any of you change your mind.”. She flips off the recorder and presides over 10 minutes of dead air. This is not helping the collective mood of state government. I know she timed that ten minutes, even though it seemed much longer. Back on the record with no other takers, and the hearing is adjourned at 10:18.

Wow. It was a long drive for an 18 minute hearing on regulations that haven’t changed and probably won’t. But like the irritating buzz of a gnat, my small protest is on the record. Someone on that hamster track is going to have to transcribe it for the permanent record. I feel one degree less depressed than I was when I arrived.

I leave the building, thinking that if it is still windy outside, perhaps I could engage in some competitive spitting. I can’t be sure, but I think I see the hearing officer doing laps in the hall when I make my way out. She’s several hundred yards closer to retirement.

Resolved: to make the best of winter.

This entry was posted on Tuesday, January 13th, 2015 at 1:55 am and posted in Uncategorized. You can follow any responses to this entry through the RSS 2.0 feed.
« There is a Season
My 60th Birthday Manifesta »