I hadn’t thought about the Musette in years.  But at Christmas time, in what turned out to be the last year of the Musette’s old life,  our friend  Angie called us with an invitation: “My sister Sue is in town.  Meet us at the Musette for Karaoke on Saturday night”.

Our friendship  dates  back to the early 1970’s.  We met when we worked together at a community agency serving children and adults with disabilities.    The Musette was called  the World Famous Frank’s Musette then.   Legend had it that Frank saw the world during World War II,  came back home to  this sleepy neighborhood, and opened a bar. 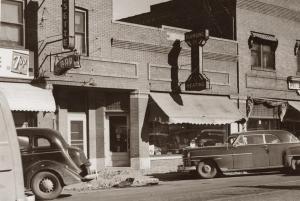 Frank’s Musette sometime in the 1940’s, before my time. Benson Historical Society Photo

It  was  a meeting place across the street from the agency  where we worked  – our first real adult world jobs.  It was  one in a row  of old brick storefronts – the faucet shop, the dry cleaners,  the Ace Hardware store with its wide worn board plank floor, on what was once the main street of  the small town of Benson

In this first year that I was  legal,  it seemed quite dizzying  to enter the Musette, to walk past the hunched-over working class backs on the stools along the bar, with a nod to Frank,  to be thought of as adult.   In summer,  it was  a  dark smoky cave,  cool to come into from the incredible summer heat,  with beer in a cool gold stream from the tap.

“Meet me at the Musette after work”.  It was a message that would circulate a couple of times a week, sometimes because it was Friday, sometimes because it had been a rough day. We were developing a new model of community services which brought  children and adults  out of  large custodial institutions.  They’d live in group homes or apartments or back in their homes; they’d spend their days in vocational workshops or special education classrooms. We had things to prove:  convince legislators to keep funding the  services; convince parents that community life was right for their young adult children; struggle with those young adults to break through years of inertia and disconnection with the outside world.  We deconstructed our days, our lives, our culture and what it valued or devalued; tried to make sense of the dialectics of change and resistance, love and desire,  oppression and rebellion,  on the large stage of the world,  and this smaller stage of our own lives, here in Benson and here at the Musette.

I first met Karla at the Musette.  She was a former  hairdresser with a brand new theology degree, full of questions and curiosities, ready to test herself, ready for a useful life.  Karla was a Mercy Girl  who grew up in South Omaha, Polish and Catholic.   Once she showed me a sheet of lined notebook paper from her Mercy High School Religion class.  An indented  list neatly labeled:  “Selection of a Husband.  A.  For Life.  B. Qualities.  Faithful in Religion. Industrious.  Moral. Thrift. Drink. Masculinity. Neatness. Normality of Sex Attitudes. Condition of Parental Home. Is he handsome.  How many girlfriends did he have before.   This list,  with no interpretive answer key, and presumably compiled by good hearted but never-married nuns,    guided Karla into a short and disastrous first marriage;  which had just ended when I met her.

Barb Morrell, Barb Jessing and Karla Kava in our shared house at 4965 Ohio Street about 1976

She had a patient way with the severely handicapped young adults who spent their days in a vocational training center across from the Musette, assembling hair curlers and fishing bobbers; learning to communicate; to socialize.  She was tall and striking, with a Slavic face, high cheekbones, flashing dark eyes and a deep cascading laugh. We became best friends; canoed the Niobrara River together;  shared a house  for  a couple of years.  When it was time for her to leave this too-small town that she had grown up in, I introduced her to friends and  colleagues I’d known on the West Coast.  It was like we traded spaces –  here I was in Nebraska, and there she was in California, later moving to Washington state.   She flew back to Nebraska  for our wedding;  and a few years later  we brought our young children across Puget Sound on the ferry to see her remote home on Lopez Island.

Somehow 30 years have flown by.  Now it is a  new century, a wintry Karaoke night at the Musette. Old Frank is long gone.  It is still dark and smoky with its line of hunched over backs on the bar stools, but tonight it is a haven of warmth as we climb mounds of plowed and icy snow along the curb to get to it. A curl of winter wind comes through the door with us.

And there we find our old friends surrounding a long table back in the corner by the shuffleboard game.    Beer is still the preferred house beverage at the Musette.  For those wanting wine, there is a neon-hued  bottled beverage called  “Berry Sophisticated”.   Red carnival tickets earn us a chance for mildly pornographic door prizes in the drawing at each intermission.  Angie, Sue, and each of the friends around the table take a turn at the Karaoke microphone.  Enthusiasm trumps talent; spirits are high.  Stories circulate; news is exchanged, smoke wafts, beer flows from the same old taps.

And then Sue asks, “So how is Karla?”

There is a pause in which her world stays the same.   She can reach back for  a memory, thirty years into the past, and find it populated with those we knew, as if no time had gone by, as if nothing had changed.  But my world had already changed.

“You didn’t know?  You didn’t hear?  She died a year ago August”.   We had seen her in June,  and everything seemed fine.  She  brought  fresh Coho  salmon in her carry-on luggage  from Seattle, and we grilled it outside and drank wine on the front porch; laughed hard; lined up all the Mercy Girls on the porch swing; watched the fireflies materialize in the sweet, hot, heavy  air of June. But within weeks of her return to Seattle  she became ill, was diagnosed with cancer, and by August she was dead.   Lung to bone to everywhere in days.

The party momentarily stops spinning around us

I think of Karla, thirty years ago at this table,  young, energetic;  head thrown back to laugh, healthy  and invincible  —  though already breathing in the daily stream of smoke that would destroy her.  I smoked too, that year.    I can’t remember why except that it added to the air of drama in our young lives. No one expected to die of it, including everyone who did.

The party, paused for a moment, begins to move again, a new contestant at the microphone.

I look up from the memory, and I see a ghost.  She was introduced briefly, a friend of one of the sisters, so I know she is real and present, and she has a name which I can’t remember.  But the slim height, the straight dark hair, the Slavic cheekbones, the dark eyes:  She is an image  of Karla, thirty years ago, as if she never aged a bit or became ill, never traveled the world,  suffered a broken heart, or died in too much pain; as if she stayed here, preserved in smoke and beer and memory, untouched.  Because the young woman is silent, as Karla never would have been, the illusion is persistent; it is there till last call, here at the world famous Musette

This entry was posted on Thursday, February 11th, 2016 at 4:27 am and posted in Uncategorized. You can follow any responses to this entry through the RSS 2.0 feed.
« A Place in Mind: Benson Named as Emerging Hipster Neighborhood
Small Places Close to Home »